The Charles Johnson Law Firm defends our Clients on drug convictions, including the possession and sale of marijuana. Our unique strategy gives our clients the best opportunity to avoid criminal penalties, and our criminal defense law firm is very familiar with drug laws, both felonies and misdemeanors. We provide each client a high-quality legal defense based on over 20 years of Criminal Law experience. Houston Criminal Lawyer Charles Johnson can defend against any criminal drug charge in both federal and state courts, and our firm’s track record of success continues to grow.

Marijuana possession and sale charges can be either misdemeanors or felonies, but both carry serious penalties. Jail time, heavy fines, probation, mandatory rehab programs and more are all possible penalties for drug charges. Attorney Johnson’s finely tuned defense techniques have evolved from years of experience, and he brings that knowledge and experience to those facing marijuana-related criminal charges.

Of all the marijuana laws in Texas, possession of marijuana may be the most unfair. It punishes otherwise responsible citizens merely for keeping some pot for personal use and who have no intention of ever doing anything hurtful with it or profiting from it. Nonetheless, it is an offense to possess, distribute or cultivate marijuana in Texas. Depending on the quantity, possession of marijuana can be charged as a misdemeanor of felony in both state and federal court.

The prosecution may argue that you’re “in possession” of marijuana in Houston, TX, if you’re found smoking marijuana or if you knowingly “exercised control” over the marijuana. Therefore, the location of the marijuana is very important:

Various states have different marijuana laws, and Texas is no different. Texas treats marijuana sales as a much more serious crime than possession, which is reflected in the penalties. The sale of any amount of marijuana can lead to prison time, even for small amounts.

Sale of Marijuana Penalties in Texas

These are for either the sale OR delivery, meaning it is irrelevant whether or not you are actually paid or just just giving it to someone. On top of that, if the delivery or sale is to a minor (in ANY amount), that is punishable by an additional 2 – 20 years in prison. Also, sale within 1,000 feet of a school or within 300 feet of a youth center, public pool or video arcade increases the penalty classification to the next highest level (which in some cases is a difference of many years).

The Houston Lawyer Charles Johnson understands the unique nature of Texas marijuana laws, and can provide a skilled defense. His unparalleled knowledge of state and federal drug laws gives him a unique ability to provide excellent legal services for you and your loved ones. If you are in need of criminal defense legal representation in the Houston area, contact Attorney Johnson anytime day or night at (713) 222-7577 to discuss your situation.

Cannabis sativa: There are two species of Cannabis. One species is Cannabis sativa, originally cultivated to make hemp. The stalks of the plant contain fibers that are woven to make rope, cloth, and paper. The other species is Cannabis indica, known for its psychoactive properties. Hashish is derived from Cannabis indica. In Africa, cannabis is know as “dagga,” in China as “ma,” and in India as “ganga” or “bhang”. Marijuana is the Mexican colloquial name for Cannabis sativa. Marijuana is a greenish-gray mixture of dried, shredded leaves, stems, seeds, and flowers of the hemp plant.

Other Chemicals: Marijuana is a complex drug and is made up of 420 chemical components. Sixty-one of these chemicals are called cannabinoids and are unique to marijuana. Many scientific studies focus on the primary psychoactive chemical, THC but don’t know how these other cannabinoids affect the various organs, brain, and behavior.

What are the Physical Effects of Marijuana usage?

When marijuana is smoked, the affects are felt in minutes. The high usually peaks within a couple of hours. Marijuana affects users differently. The “high” can include a feeling of relaxation, improved sense perception, and emotional well-being. Music and visual images may seem more vibrant and intense. Time seems to slow down. Some people experience physical hunger and a range of emotion from laughter to introspection. Marijuana does not always produce pleasant feelings and may cause paranoia and hallucinations. Emergency room visits have increased because some people feel anxious or fearful after smoking high-grade marijuana. Whether the marijuana is smoked or eaten, THC can remain in the body for days. About half the THC is in the blood 20 hours after smoking. Although the initial high has disappeared, physical and mental functions may be affected for days.

The physical effects of marijuana depend on many individual factors such as personal health, the time of day that marijuana is used, the problems it causes, and how well a person is able to control his or her use. Research studies have shown that one of the primary concerns for those who use marijuana is cardiovascular damage. Marijuana causes damage to lungs that is similar to that caused by cigarettes. For people who inhale deeply or hold the smoke in their lungs longer, the risk can be greater. One study that compared cigarette and marijuana smokers found that marijuana smokers absorbed five times the amount of carbon monoxide, and had five times the tar in their lungs, as compared to cigarette smokers. For those who smoke both marijuana and cigarettes, the damage can be exponentially greater than that caused by marijuana or cigarettes alone.

Research shows that people who use marijuana more than one time during the day tend to have more social and physical problems than those who only use in the evenings. Those who use at multiple times may also be more likely to be smoking to avoid problems they feel unable to confront. A person who uses marijuana in addition to alcohol or other drugs can be at additional risk. The effects of some drugs become exponentially greater when taken together. In addition, the physical tolerance that one drug produces can sometimes affect another drug, and lead to dependence on multiple substances.

While marijuana is not in the same addictive league as cocaine, heroin, and even alcohol, recent studies raise the possibility that THC affects the level of dopamine in the brain. Dopamine is a chemical in the brain that affects the pleasure circuits. Many addictive drugs cause the release of dopamine from the neurons. One report by the National Institute of Drug Abuse states that long-term marijuana use can lead to addiction for some people. This report concludes that along with craving, withdrawal symptoms can make it hard for long-term marijuana smokers to stop using the drug. People trying to quit report irritability, difficulty sleeping, and anxiety.

Under federal law the term drug paraphernalia means “any equipment, product or material of any kind which is primarily intended or designed for use in manufacturing, compounding, converting, concealing, producing, processing, preparing, injecting, ingesting, inhaling, or otherwise introducing into the human body a controlled substance.”

Drug paraphernalia is any legitimate equipment, product, or material that is modified for making, using, or concealing illegal drugs such as cocaine, heroin, marijuana, and methamphetamine. Drug paraphernalia generally falls into two categories:

Dealer-specific products are used by drug traffickers for preparing illegal drugs for distribution at the street level. Items such as scales, vials, and baggies fall into this category. Drug paraphernalia does not include any items traditionally used with tobacco, like pipes and rolling papers.

With the rise of the drug culture in the United States in the 1960s and 1970s, the country began to see the appearance of “head shops,” which were stores that sold a wide range of drug paraphernalia. While some of the paraphernalia was crude and home-made, much was being commercially manufactured to cater to a fast-growing market. Enterprising individuals even sold items openly in the street, until anti-paraphernalia laws in the 1980s eventually ended such blatant sales. Today, law enforcement faces another challenge. With the advent of the Internet, criminals have greatly expanded their illicit sales to a worldwide market for drug paraphernalia. For example, in a recent law enforcement effort, Operation Pipedreams, the 18 companies targeted accounted for more than a quarter of a billion dollars in retail drug paraphernalia sales annually. Typically, such illicit businesses operate retail stores as well as websites posing as retailers of legitimate tobacco accessories when in reality the products are intended for the illegal drug trade.

Identifying drug paraphernalia can be challenging because products often are marketed as though they were designed for legitimate purposes. Marijuana pipes and bongs, for example, frequently carry a misleading disclaimer indicating that they are intended to be used only with tobacco products. Recognizing drug paraphernalia often involves considering other factors such as the manner in which items are displayed for sale, descriptive materials or instructions accompanying the items, and the type of business selling the items.

Before someone can be convicted of marijuana possession in Houston, the state must prove that the accused actually had possession or took action to control the drug. Drug possession cases are complicated and depend the police’s adherence to strict guidelines concerning search and seizure of the drug.

As you could be facing fines, probation, drug classes, community service, and jail, it is crucial that you speak with an experienced Houston criminal attorney if you have been accused of this crime. Our team at the Charles Johnson Law Firm is well-equipped to handle any type of drug crime, including those involving possession of marijuana and/or drug paraphernalia. We understand that mistakes can happen and not everyone who has been accused of a crime is guilty. No matter how serious you may believe your case to be, contact Houston Lawyer Charles Johnson directly by calling (713) 222-7577 anytime, day or night to discuss your case. 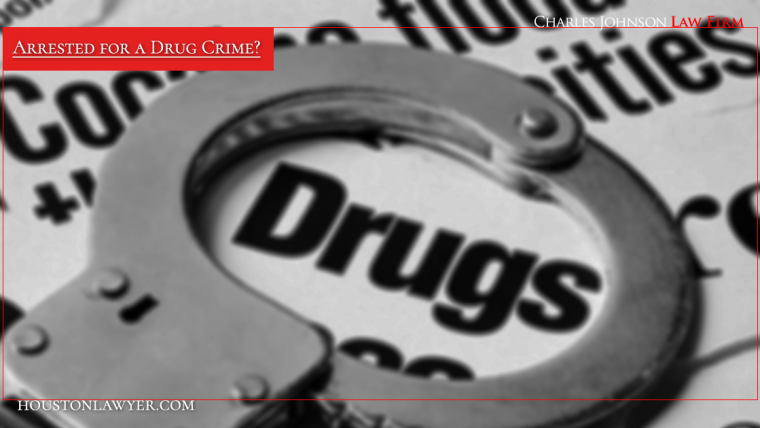