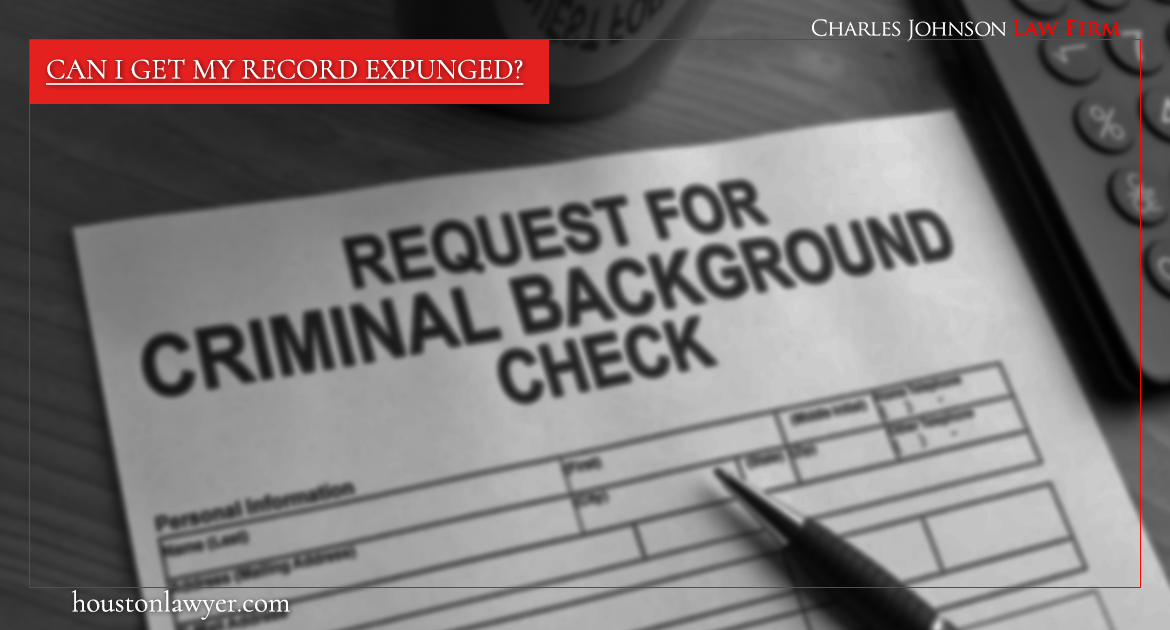 In Texas, some criminal records can be sealed or expunged so that the general public cannot access them.

Texas’ expungement and record sealing rules are complicated, and the law can change at any time. To learn more about the law—and to find out if your criminal record is eligible for sealing or expunction—contact Texas Expungement Attorney Charles Johnson, a Criminal Defense Attorney in Houston, TX, who has more than two decades of experience handling these types of cases.

Houston Criminal Lawyer and Expungement Attorney Attorney Charles Johnson can be reached 24 hours a day, 7 days a week for your Free Case Review and Consultation.
Call us at 713-222-7577 or toll free at 877-308-0100.
Major Credit Cards Accepted.
Easy Payment Plans Available.

In Texas, expunction (called “expungement” in some states) and record sealing are two different processes. But when a record is sealed or expunged, most potential employers who conduct background checks, for example, will be prohibited from accessing the information. And, in many cases, once your record has been expunged or sealed you do not have to disclose it. (Texas Code of Criminal Procedure Article. 55.03; Texas Government Code § 411.0755 (2018).)

Expunction. If a court orders your record to be expunged, it may not be released or used for any purpose. After receiving an expunction, you are permitted to deny that you have been arrested or had a record expunged, unless you are asked about an expunged record while under oath in a criminal trial. In that case, you need only state that the record in question has been expunged. (Texas Code of Criminal Procedure Article 55.03 (2018).)

Record sealing under an Order of Nondisclosure. Some criminal records in Texas can be sealed by a court under an Order of Nondisclosure. Once a criminal history record is sealed, the general public will not be able to view it. Under Texas law, criminal justice agencies will have access to sealed information, and they may disclose it only to you, other criminal justice agencies, or the licensing and employment entities specified in the law. That means that if you are applying for a job at a school, for example, a Texas law enforcement agency would be required to share your sealed record with your potential employer if it requests the information. (Texas Government Code §§ 411.076, 411.0765 (2018).)

Your criminal record may be eligible for expunction if you were arrested for a misdemeanor or felony and:

If you are a close relative of a deceased person with a criminal record that is eligible for expunction, you can apply to have the record expunged on that person’s behalf. The law defines a close relative as a parent, grandparent, spouse, or adult brother, sister, or child of the deceased person. (Texas Code of Criminal Procedure Article 55.011 (2018).)

Your criminal record may be eligible for sealing under an order of nondisclosure if you pled guilty or no contest to a crime and were placed on deferred adjudication community supervision, meaning that:

Additionally, most misdemeanor convictions are eligible for sealing. If your punishment consisted of a fine only, there is no waiting period. Otherwise, you must wait two years after you have successfully completed your sentence to apply to have your record sealed. (Texas Government Code §§ 411.073, 411.0735 (2018).)

However, some crimes are never eligible for sealing under an order of disclosure, including:

Many people who are arrested but are found not guilty or have their cases dismissed are surprised to learn that they still have criminal records. The only way a person can have his or her criminal history taken out of public view is to get the record expunged or sealed.

Finding a Texas Attorney for Sealing or Expunging Records

If you believe that you are eligible to have your record sealed or expunged, take an important step today by contacting an Expungement Attorney, Houston Criminal Attorney Charles Johnson.  The Charles Johnson Law Firm helps get criminal records expunged all over the Houston area, including locations in Harris County, Montgomery County, Brazoria County, Fort Bend County, Liberty County, Waller County, and Galveston County. Contact our Firm today at (713) 222-7577 for your free case review.