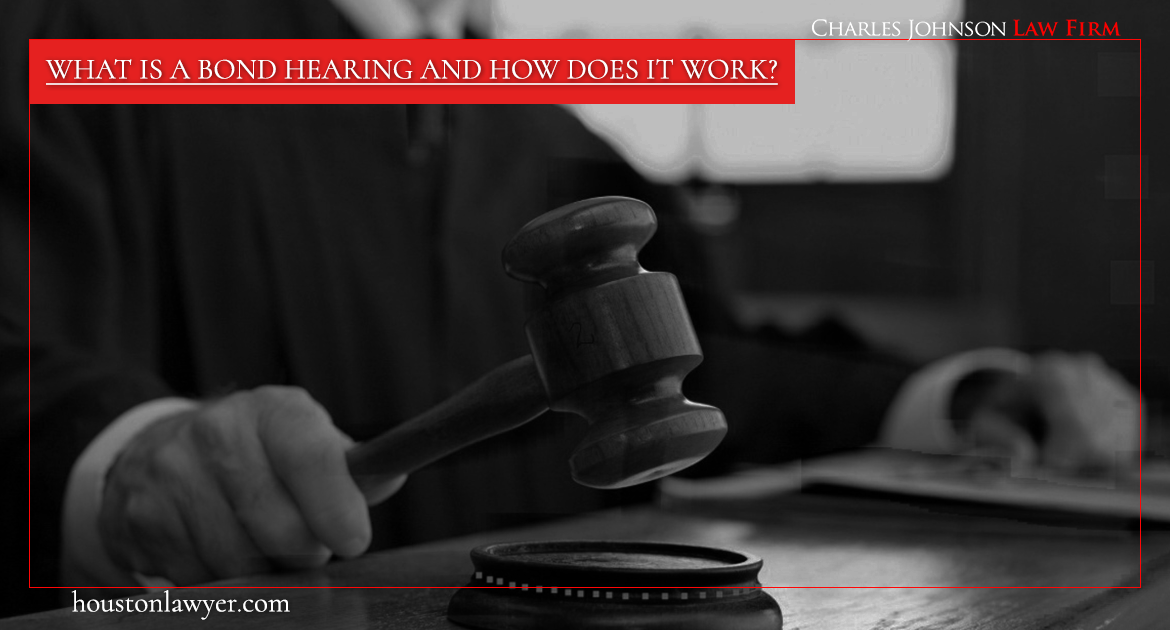 DO YOU NEED A BOND OR BAIL HEARING SET?

During a bond hearing, a defendant typically appears in court and requests that the judge allow him/her to be released from police custody while their criminal case is pending. It is common for the initial hearing-where the accused hears the charges- to also be a first bail bond hearing. This is known as an “arraignment”. Sometimes however, the bond hearing is a separate proceeding. This is common in courthouses where bail hearings only take place at set times and days during the week. Typically, if bail bond hearing and arraignment are done at the same time, it must be within 48 to 72 hours after the accused has been arrested, although this may vary sometimes.

You are entitled to the best legal defense possible. Houston Criminal Lawyer and Bond Hearing Authority Charles Johnson can deliver that defense for you. You can contact Houston Lawyer Charles Johnson day or night, 24 hours/day 7 days/week and speak with him directly at (713) 222-7577. His Law Office is headquartered in Houston, with offices conveniently located in Dallas, Austin and San Antonio.  You can take advantage of your Free Case Review right over the phone and speak directly to Attorney Charles Johnson.  Call Today and let him go to war for you to save your future.

What Happens During a Bond Hearing?

During a bond hearing, your defense lawyer will ask for you to be released, placing either their word or a dollar amount up as a bond. Experienced Bond Hearing Attorney Charles Johnson will advocate for your release under the most favorable and least restrictive terms. The prosecution will be present at the hearing and will either agree with the request, have an alternative proposal, or seek a no bond order against you. The judge will then make a final decision.

Uniquely, during a bail hearing, the accused carries the burden of proof. Judges make decisions based on the proof that the defendant presents, but they also look at the charges, whether the defendant has a past criminal history, has close ties to the community and family, and his or her financial resources and financial situation.

How Bail Is Set

Bail is not always an arbitrary figure at the discretion of the judge.  In many jurisdictions it is down to a certain bail schedule, which is used for reference. There is more to bail than just a dollar amount. Judges usually also have various conditions and restrictions, which are totally up to their discretion. Other restrictions include:

The Eighth Amendment to the United States Constitution prohibits judges from setting excessive bail. If the defendant cannot afford the amount of bail, a Motion to Reduce Bail can be filed and heard by the Court. Similarly, the prosecution can request a bail increase if they believe the bail amount is insufficient to protect society and/or guarantee the Defendant’s appearance. The burden of proof, in both cases, is on the defendant who must demonstrate either that the bail is set too high (if asking for a reduction) or that it is fair (if the prosecution asks for an increase).

During the Bail Hearing

The Court presides over bail hearings and there is no jury. During the hearing, the judge will listen to the arguments presented and decide whether bail should be granted and in what amount. To do this, the judge will look for certain specific things, including:

The defendant’s character and history.

This involves financial resources; mental and physical condition; drug and alcohol history; family ties; record in relation to past court appearances; criminal history; and how long the defendant has lived in the community.

The risk the defendant poses to the community.

It is possible for defendants to be held without bail if the judge feels they pose a threat to the community. In many cases, this is because someone is held on a capital crime, or because they have previously absconded. In many cases, and particularly those where a judge may consider not releasing on bond at all, special conditions will be imposed should the defendants argue for their release. These include limiting travel, seeking or maintaining employment, taking part in regular alcohol and drug testing, taking part in psychological treatment, enrolling in or maintaining an educational program, complying with a set curfew, not consuming drugs or excessive alcohol, being under house arrest, checking in with authorities regularly, not possessing a firearm, not contacting anyone in relation to the case (particularly the complainant), signing a bond agreement and more.

A Court may allow bail despite the government requesting that it be denied. Appeals can be made, although limited in scope. The only question will be whether the Court abused its discretion.  Bail decisions are almost always upheld, unless evidence can be presented that the ruling was arbitrary, erroneous, or unreasonable. This means that it must be demonstrated that it is in opposition to the law or the facts. It does not look at any of the factors that were previously taken into consideration to determine whether or not someone should be granted bail at all, it only determines whether the judge made the right decision.

It is generally hoped, at least by the defendant, that the court will approve the bail request in full. In most cases where this happens, the prosecution would also be in agreement. Specific conditions will be set if the defendant is to remain out of custody, however, which will usually be linked to employment, education, travel, substance use, medical treatment, curfews, and regular meetings with the authorities.

It is equally possible for a judge to deny the hearing, however. In this case, the defendant will remain in jail. Should this happen, appeals can be made, but the process is often slow.

If defendants break the conditions of their bail, it will be unlikely that they will be granted bail again – in either the present case or subsequent cases, for that matter.

The process of bail hearings is quite straightforward. Whether defendants receive a favorable hearing will depend mainly on how well prepared they are, their history, and how good the defense lawyer is.

Types of Bail/Bond in Houston

Depending on circumstances, the defendant could be released from custody under the following types of bail:

By law, bail cannot be set in an excessive amount, or used to punish the defendant. To prevent this, most counties in Texas have a bail schedule that denotes the bail amount based on the type of offense the defendant is alleged to have committed.

It’s important to speak with an attorney as soon as you’ve been arrested. If you are facing an exorbitant or unreasonable bail amount or need to get a bond amount set, contact the Charles Johnson Law Firm today for help.  Call (713) 222-7577 today to get the experienced legal help you need today.