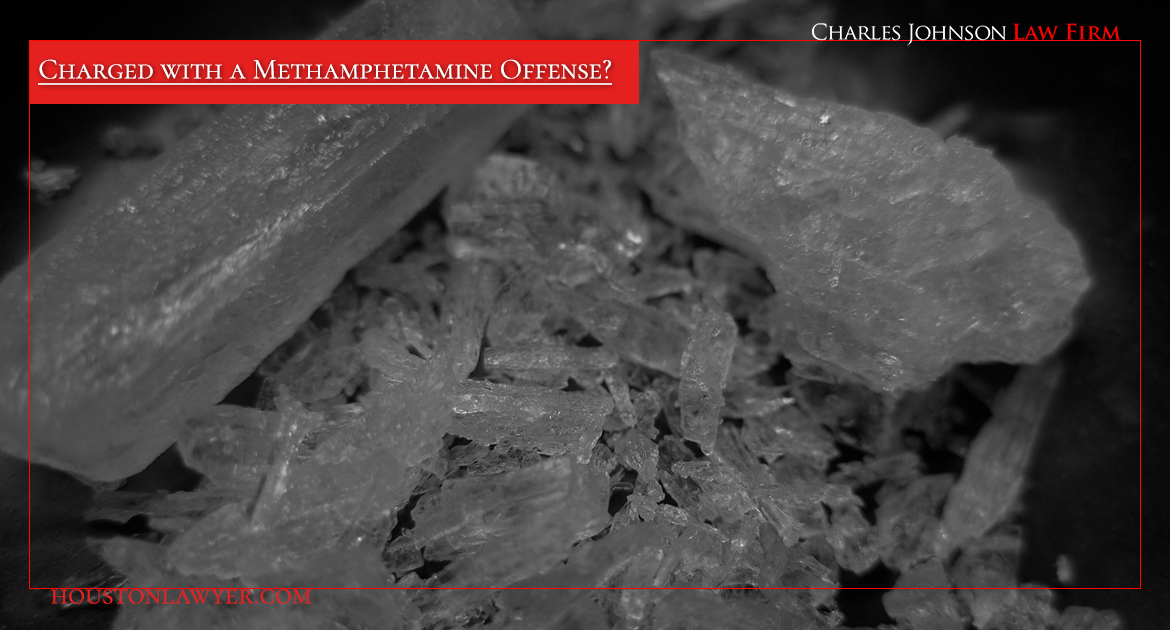 Whether you are currently under investigation for a drug crime involving Methamphetamine or have already been arrested, it’s important to retain criminal defense representation from a skilled Houston Lawyer. Texas has some of the most stringent illegal drug laws in the country, and the police and prosecutors involved with your criminal case aren’t going to let you off easy. By working with an attorney who has considerable knowledge, expertise, and practice of this type of criminal law, your odds of resolving your case effectively increase greatly. Houston Meth Lawyer Charles Johnson will be by your side during this difficult time in your life.

Methamphetamine is the illegal drug with the fastest growing rate of abuse in the United States. More U.S. counties (48%) report that meth may be the principal drug problem in the country – more than cocaine (22%), marijuana (22%) and heroin (3%) put together. Meth laboratory seizures have increased 577 percent nationwide since 1995. Methamphetamine, also known as “speed,” “crank,” “chalk,” or “ice” among many others, has been hooking people for years. But illegal production and use of the hugely addictive stimulant have exploded in the last few years, spawning what some authorities call America’s first rural drug epidemic. Methamphetamine is a strong stimulant that can cause a high that lasts from six to Twenty four hours. Once favored mainly by West Coast bike gangs, methamphetamine is now spreading across the nation. As outlined by US government surveys, treatment for meth addiction has more than quadrupled since 1993. Greater than 12 million men and women above the age of 12 have experimented with methamphetamine, including one out of 10 adolescents (according to the US Centers for Disease Control and Prevention).

What exactly is Methamphetamine?

Methamphetamine is an extremely addictive stimulant that directly has an effect on the pleasure centers within the brain. With repeated use of meth, it turns off the brain’s capacity to produce dopamine which simply leaves the users of methamphetamine incapable of enjoying anything but more methamphetamine. Methamphetamine is usually smoked, injected intravenously, snorted, or perhaps ingested orally. The drug alters mood in different ways, dependent on how it is utilized.

Meth is known to raise the user’s heart rate, blood pressure, temperature, and respiratory rate, a reduction in appetite, sleep, reaction time, and lung function. Extended use of meth can result in a number of conditions for example “meth mouth”, depression, amphetamine psychosis, obsessive scratching, anorexia, unfavorable social behavior, every type of child neglect, neglect of hygiene and property, prenatal exposure, dangerous sexual tendencies associated with the spread of HIV and also STD’s, aggressive behavior, criminal actions, and death from the collapse of the cardiovascular system and/or bleeding in the brain, cardiac arrest or hypothermia. Moreover, there are many side affects related to overdose which include death, brain damage, feelings of flesh crawling bugs connected with compulsive picking and infecting lesions, muscle breakdown producing kidney failure, hallucinations, delusions, along with paranoia. These terrible conditions linked to meth don’t even include the many accidents and deaths that could occur during the cooking process due to fires, explosions, and getting into contact with extremely dangerous chemical substances typically while the user is under the influence.

Meth is known as a central nervous system stimulant with a significant potential for abuse and dependency. A synthetic illegal drug, Methamphetamine is closely related chemically to amphetamine, yet creates increased effects on the central nervous system. The drug’s euphoric effects are comparable to, but longer lasting than those from cocaine. It typically comes in three forms: 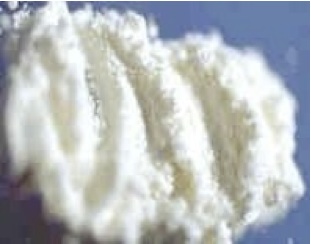 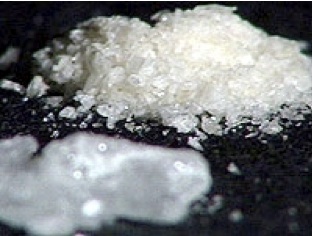 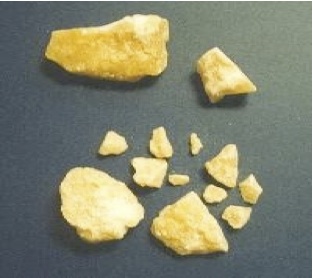 Signs and symptoms of Methamphetamine Addiction

Users can become hooked the first time they take meth, and the addiction is probably the most challenging to treat. People who take methamphetamine may become aggressive and paranoid, and the drug may cause heart attacks and death.

Addicts are typically chronic methamphetamine abusers completely preoccupied with avoiding the “crash”, a period of low energy and deep depression occurring after the individual stops using the drug. Throughout the crash, an individual often sleeps, even up to several days at a time, leaving kids unsupervised.

Methamphetamine dependency is quick, and so is the deterioration within the individual’s family and way of life. Drug tolerance to methamphetamine builds up quickly, and the user typically continues his impairment from abusing other drugs or alcohol, an activity referred to as “tweaking”, to ease the extremely unpleasant feeling after a binge. The tweaker is frequently paranoid and experiences a period of delusions and hallucinations during which violent reactions to otherwise harmless stimuli are routine. Frequently, it is children that happen to be in the way.

The horror of meth abuse just cannot be overstated.

Methamphetamine abuse consumes the quality of life and destroys individuals. In the series of photographs below, the female depicted was 38 years of age when she died. Incredibly, she is actually still living in the last photograph. Each photograph represents about Eleven months. 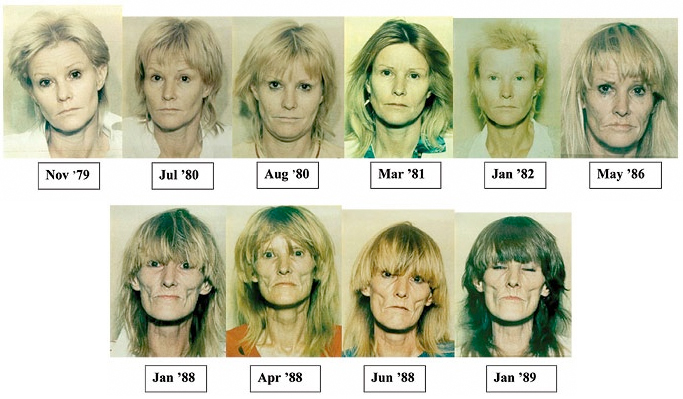 Methamphetamine was first produced in Germany in 1887, but not for the recreational use that we find nowadays. It was produced to deal with various types of depression, weight control (obesity), narcolepsy, and alcoholism. In the Second World War, Methamphetamine was widely used by Nazi soldiers. Hitler’s troops, aviators, and tank crews received chocolate laced with Meth frequently. Following the war, through the 1970’s, the drug was commonly used primarily for medicinal reasons and one could acquire a legal prescription of Methamphetamine. It was not until the 1980’s that we started to see Meth being produced for recreational uses. By the mid- 1980’s we started to notice meth being manufactured illicitly in Texas, and since then, the illicit manufacturing of meth has spread like wildfire.

The addictive character of meth generates numerous difficulties for law enforcement. People commonly become addicted from a single use of the drug and discover it almost impossible to later cease using meth. Users, dealers and traffickers often target adolescents to start using meth. The DEA has found evidence of this from the increase in availability of flavored methamphetamine. Flavors including strawberry or “strawberry quick,” cola, and chocolate flavored meth have been found by bodies in California, Nevada, Washington, Idaho, Texas, New Mexico, Missouri, and Minnesota.

Safety factors are also a huge obstacle for law enforcement if they happen to find a covert methamphetamine lab. It is a common practice for small meth lab operators to encircle their laboratories with booby traps, meant to seriously harm trespassers. Many of these booby traps include rigged shot firearms behind doors and refrigerators, traps that release harmful fumes, and even poisonous snakes.

Individuals who violate the law by manufacturing, possessing, or distributing methamphetamine frequently break the law in other ways also – because of or in support of their meth addiction. Many law enforcement agencies will point to the connection between meth manufacturers and meth addicts and criminal acts including: homicide, domestic assault, illegal possession of weapons, theft and identity fraud.

Whatever illegal drug charges you are defending, it’s of the utmost necessity that you retain the services of the Houston Criminal Defense Lawyer who will battle to avoid the severe penalties that are the consequence of drug-related conviction. Even if it’s your initial criminal offense, you could have to deal with a mandatory jail sentence, as well as considerable fines and a felony on your record.

The attorney you hire to defend you can easily make a big difference in whether you win your court case and steer clear of a life-altering conviction. Nonetheless, in a city like Houston, TX, finding the right Houston Lawyer can be challenging. When looking for a Houston drug defense lawyer to handle your court case, you ought to locate a lawyer who’s experienced, but who can also come up with innovative defense tactics for battling your criminal charges. Ultimately, many lawyers are familiar with what the law states, but Lawyer Johnson is skilled at utilizing his understanding of the law to come up with unquestionably inventive and effective ways to defend his clients against their criminal charges.

If you or a loved one has been arrested for an offense associated with Methamphetamine possession, manufacturing or distribution in Houston, obtain the support of Houston Lawyer Charles Johnson as soon as possible.