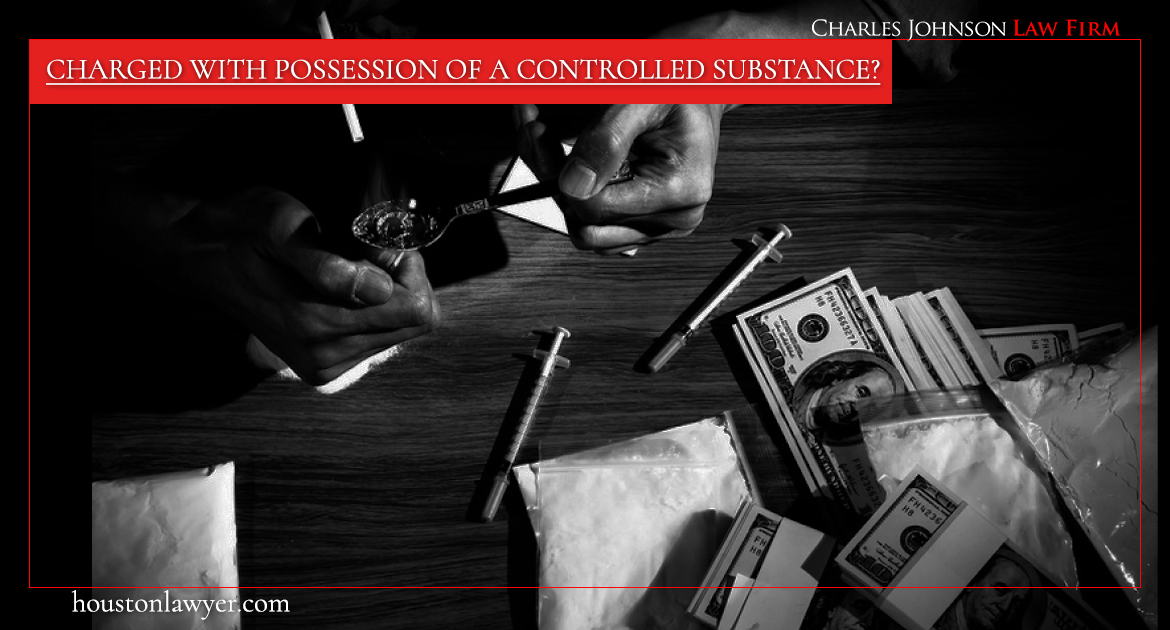 Charges of Possession of a Controlled Substance (POCS) in the Houston area are quite common. Often times the controlled substance charge results after someone has already been arrested. For example, someone is arrested for DWI, public intoxication or an outstanding warrant and the controlled substance is found after arrest or during the process of being booked in to the Harris County Jail. Whether it’s a loose Vicodin pill in your purse or a Xanax pill that your friend gave you, drug charges can be filed.

You are entitled to the best legal defense possible. Houston Criminal Lawyer and Drug Charge Authority Charles Johnson can deliver that defense for you. You can contact Houston Drug Lawyer Charles Johnson day or night, 24 hours/day 7 days/week and speak with him directly at (713) 222-7577. His Law Office is headquartered in Houston, with offices conveniently located in Dallas, Austin and San Antonio.  You can take advantage of your Free Case Review right over the phone and speak directly to Attorney Charles Johnson.  Call Today and let him go to war for you to save your family’s future. Easy Payment Plans Available.

Possession of a Controlled Substance in Texas

Under Texas Health and Safety Code §§ 481.115 – 481.118, an individual can be charged with the offense of possession of a controlled substance (POCS) if they knowingly or intentionally possess any of the substances listed in Penalty Group I-IV without  a valid prescription from a doctor, including drugs, dangerous drugs, chemicals, narcotics, stimulants, prescription pills, medications, synthetic substances and natural substances. Penalties for possession of controlled substances differ based on the type of drug and the quantity you are carrying.  The penalties for possessing any of the above drugs range from 180 days to 99 years in jail. Your license can also be suspended for six months if you are convicted of violating the Texas Controlled Substance Act, and police have the right to seize any property, such as your car or home, that was used or was going to be used in the commission of drugs.

Charges of Possession of a Controlled Substance

Delivery of a Controlled Substance

It is an offense under both state and federal law to deliver or to have an intent to deliver a controlled substance.  “Deliver” means to transfer, actually or constructively, to another person and includes offering to sell a controlled substance as well.  Therefore, money does not have to actually be exchanged, and the “middleman” who helped arrange the transaction can also be prosecuted under this theory.  Under federal law, the most commonly charged delivery offense is possession of a controlled substance with the intent to deliver.  Under that type of charge, the government does not have to prove that you actually delivered the substance, but only that you had an intent to do so.  Most often, the government will attempt to this intent based on the large quantity of drugs found, or the possession of other indicators including scales, baggies, or cutting agents.

Manufacturing of a Controlled Substance

It is an offense under both state and federal law to manufacture a controlled substance.  Manufacturing refers to the production or creation of drugs and is most commonly prosecuted in cases involving marijuana grow operations or meth labs.  It is also a crime to possess certain drug precursors with the intent to manufacture and pharmacies now vigilantly monitor the sales of commonly used precursors such as certain cold medicines, matches, and lighter fluid.

Conspiracy to Possess with the Intent to Distribute a Controlled Substance

One of the most frequently charged drug offenses in federal court is conspiracy to possess with the intent to distribute a controlled substance, which involves actively planning with others to possess or distribute a controlled substance, regardless of actual possession or delivery.  This is typically the most serious type of drug accusation and usually involves multiple defendants and large quantities of drugs and can be extremely serious and complicated.

Due to the skyrocketing methamphetamine problem, the penalties for possession, delivery and manufacturing of methamphetamine have become extremely severe.  In addition, in Texas, depending on the quantity, there is a 15-20 mandatory minimum sentence if a child younger than 18 years of age was present on when the manufacturing of a controlled substance offense occurred.  In an effort to combat methamphetamine production, many counties in Texas have implemented “Meth Watch” programs which record and monitor over-the-counter cold medicines, prescription drugs, and household ingredients which are used to manufacture methamphetamine.

It is an offense to possess or distribute even the smallest amount of cocaine.  For example, even if there is a trace amount of cocaine found in a baggie, you can still be charged with possession of a cocaine which is a felony.  In the federal system, the penalties for cocaine base (crack cocaine) are notoriously severe.  In fact, the sentences for possession of cocaine base were so severe, especially in comparison with possession of an equal amount of powder cocaine, that the United States Sentencing Commission recently amended the Federal Sentencing Guidelines to slightly reduce the penalties for crack cocaine offenses.

Under Texas law, it is a crime to possess or deliver drug paraphernalia.  Depending on the circumstances, what constitutes drug paraphernalia is very broad and can include pipes, lighters, plastic baggies and rolling papers if the government can show that there was an intent to use the items to use drugs.  In addition, it is also a crime to possess any items with the intent that they be used to cultivate a controlled substance which could include gardening equipment and fertilizers.

Penalties and Punishment for Possession of Controlled Substance in Texas

Additional penalties may include the suspension of your driver’s license or the possibility or seizure and forfeiture of any property if the property was used or was going to be used in the commission of a drug crime.

If you or someone you love has been arrested and charged for possession of a controlled substance in the Houston area or anywhere in Texas, contact Houston Drug Defense Lawyer Charles Johnson today to get the experienced criminal defense you need and deserve. The Charles Johnson Law Firm has offices located in Houston, Dallas, Austin and San Antonio for your convenience. Attorney Johnson will speak to you whenever you need him. He can be reached directly at (713) 222-7577 24 hours/day, any day of the year.

It must be proven that you actually exercised a great degree of care, custody, control or management of the drug. Since many drug arrests in Texas involve finding drugs in a home or car it can be unclear who actually possessed or controlled the drugs. The individual must have full knowledge of possession — if they are unaware, then no crime has been committed. This could happen when an individual borrows a friend’s car only to be pulled over and charged with possession when marijuana is found in the glove box.

Keeping the above items in mind, according to Texas law the offense of drug possession occurs when a person has knowledge that they have a controlled substance within their control and have the intent to possess that substance.

If you have been charged with possession of a controlled substance, contact Houston Drug Lawyer Charles Johnson immediately. In many cases, he can get your case dismissed or reduced and avoid having a felony conviction on your record.

The Charles Johnson Law Firm combines the experience of a criminal defense attorney with a seasoned support staff and professional investigators. Investigations start immediately by securing documentation involving witness statements and police reports. Police labs are put on notice to verify the alleged illegal substance and its true quantity.

After the facts are assembled, we will pursue the best outcome by negotiating a reduced punishment or pursue a trial in court. Options also exist that encompass counseling and rehabilitation programs for addiction problems.

Possession of marijuana is in a separate drug offense category in Texas but is still extremely serious with the potential of being charged as a felony or misdemeanor, depending on the amount possessed. All charges in Texas for drug possession are quite serious. This is not the time to hide your head in the sand and hope for the best — you need an aggressive attorney who will fight hard to get your charges dismissed or possibly reduced. A drug conviction on your record will follow you for the rest of your life, so take it very seriously and hire an attorney who does the same.

Contact Experienced Houston Drug Defense Lawyer Charles Johnson if you have been arrested for possession of a controlled substance. An arrest for possession of controlled substance in Texas can have devastating consequences and severe repercussions that can in all probability be avoided if you select the right lawyer. Call Attorney Johnson anytime day or night at (713) 222-7577. He is available to discuss your case whenever you need him.

Everything You Need To Know About the Appeals Process in Texas