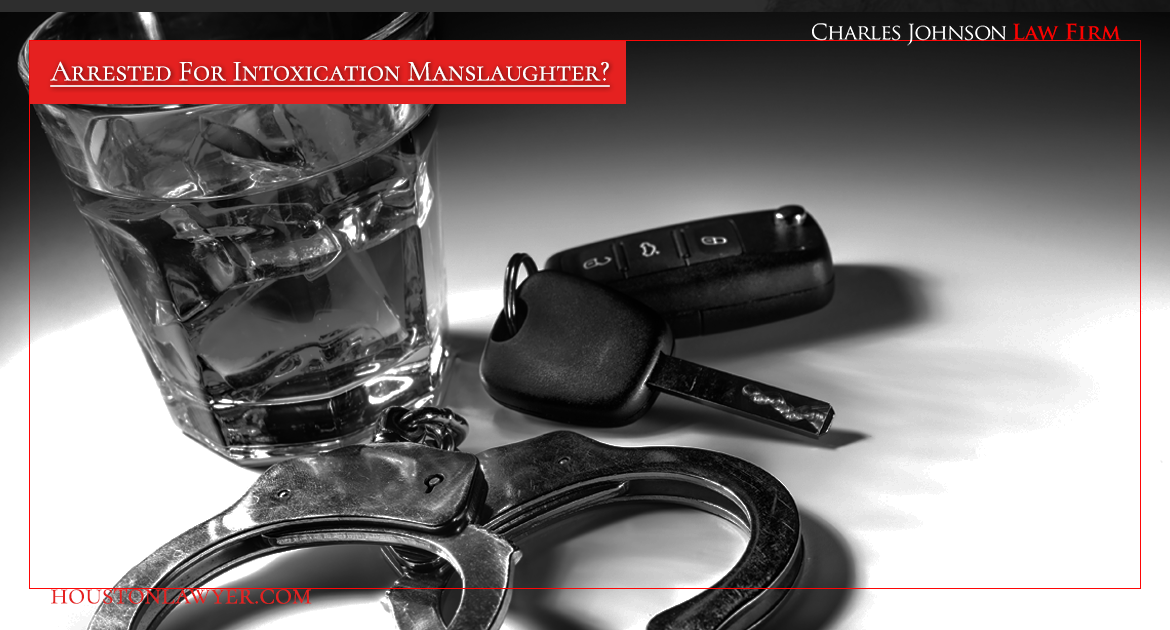 Protect Your Rights, Your Future, Your Peace of Mind.

No one truly intends to commit intoxication manslaughter. They do not wake up and say “I’m going to get drunk tonight and drive and see who gets in my way.”

Accidents do happen and tragically, someone can die. Mitigating factors are thoroughly checked out such as whether the person broke any traffic laws, was driving with a suspended license, or if the person was negligent in some way. These are usually tried as misdemeanors. However, if a person is found to be intoxicated or under the influence of something, it is treated in Texas as a second degree felony and the prosecution goes after the person diligently. In intoxication manslaughter cases, the prosecution only has to prove that the driver was indeed, intoxicated. The term of incarceration could be anything from two years to twenty years.

Houston Criminal Lawyer and Intoxication Manslaughter Expert Attorney Charles Johnson can be reached 24 hours a day, 7 days a week for your Free Case Review and Consultation.
Call us at 713-222-7577 or toll free at 877-308-0100.
Major Credit Cards Accepted.

If you have been charged with DWI after being in an accident that involved a death, you may be facing very serious charges of intoxication manslaughter. It is imperative that you speak with Houston Criminal Lawyer Charles Johnson as soon as possible after you have been charged, or think you may be charged. Attorney Johnson has the experience you can rely on for aggressive and effective defense strategies against the charges. The skilled attorneys at the Charles Johnson Law Firm do not believe there is any such thing as being slam-dunk guilty. No matter what the circumstances of the accident are, your personal story is behind the charges and will make a difference in the outcome of your case. We will make sure that the judge and jury know that this isn’t just about an intoxication manslaughter case. It is about you and your family.

Intoxication manslaughter is a Second Degree felony which holds people liable for any death which occurs because of criminal negligence, or a violation of traffic safety laws. A common use of the vehicular manslaughter laws involves prosecution for a death caused by driving under the influence (determined by excessive blood alcohol content levels set by individual U.S. states), although an independent infraction (such as driving with a suspended driver’s license), or negligence, is usually also required.

Intoxication manslaughter, vehicular manslaughter and other similar offences require a lesser mens rea (Latin for “guilty mind”. In criminal law, it is viewed as one of the necessary elements of a crime) than other manslaughter offenses. Furthermore, the fact that the defendant is entitled to use the alcohol, controlled substance, drug, dangerous drug, or other substance, is no defense. For example, in Texas, to prove intoxication manslaughter, it is not necessary to prove the person was negligent in causing the death of another, nor that they unlawfully used the substance that intoxicated them, but only that they were intoxicated, and operated a motor vehicle, and someone died as a result.

In Texas, intoxication manslaughter does not only apply to automobile drivers. Individuals may be charged with this crime under any of the following circumstances:

If the alleged offender has done any of these things while intoxicated, and someone was killed by the vehicle they were operating or had assembled, they can be convicted of intoxication manslaughter. There is no requirement that the prosecutor prove negligence, that their intoxication was the direct cause of the crash, or that they were behaving unlawfully by using the substance that caused their intoxication.

Intoxication manslaughter cases should be attacked on two fronts if the case is going to trial. Notwithstanding whether a person is or is not intoxicated, a good lawyer would examine the Texas Peace Officer collision report which was completed as part of the investigation. Just because a driver may be intoxicated does not mean that he should be held criminally liable for the death of another.

There have been cases where the deceased driver was as much at fault if not more at fault than the accused. Examples could include the deceased having run a red light, the deceased having operated his motor vehicle at night without lights, the deceased also being intoxicated, the deceased merging improperly into traffic, and the list goes on. A lawyer familiar with crash reconstruction and who has worked with reconstruction experts should be able to present this defense if it is available. The issue is one of causation and is set forth in Tex. Penal Code Section 6.04. In a nutshell, what 6.04 states is that if an accused’s conduct is insufficient in itself to cause the result, and the conduct of another contributed to the result and the contributing cause was sufficient to cause the result, the accused cannot be held liable.

The second line of defense is whether a person is intoxicated. Scientific evidence can be compelling for a jury. However, the State is allowed to rely upon opinion evidence based upon observations such as lack of coordination, blood shot eyes, smell of intoxicants on breath, slurred speech etc. Some of these symptom could be explained by lack of sleep, allergies, injury, but not all.

Most police departments have on board video cameras and video may very well have been used in this case. Video can be a two-edge sword. Many a video has convinced a defendant to make the best deal possible, while other videos have convinced an accused to take it to trial

In blood draws/test results, there are several considerations. A blood sample can be lost, yet there can be a medical record from a laboratory stating what the test result is. In fact, most hospitals don’t retain the blood samples, but for a very short period. If the blood draw was for medical treatment, sometimes there is a chain of custody problem that makes admission of the medical records unreliable. Most courts, when dealing with a chain of custody issue on medical records as the result of medical treatment rule that any problems goes to the weight of the evidence, not the admissibility, that is, the records gets admitted but the defense lawyer gets to argue that it is not reliable because of the poor chain of custody.

Mandatory blood draws can be attacked, however, you should hire a lawyer familiar with the statutory and administrative requirements for blood draws.

When you are charged with intoxication manslaughter or intoxication assault, you have more than just the prosecutor against you. You have the victim’s family and the public screaming for your head. You don’t have to go through this alone. The Charles Johnson Law Firm will fight aggressively to protect your rights and your future.

After a car accident in which there has been a fatality, it is an extremely upsetting situation for everyone involved. Law enforcement will collect evidence at the scene and this evidence is an important part of the documentation of the case. It is crucial that if you have been charged with intoxication manslaughter that you contact The Charles Johnson Law Firm quickly. The evidence in the case can be reviewed and an attorney can advise you what can be done in your case. Houston Criminal Lawyer Charles Johnson can offer a free evaluation of your case, and it is advised that you take advantage of this so it can be determined what can be done and what options may be possible in your case.

Houston Attorney » Charged With DWI? Learn How to Beat It.